To Mask or not to Mask 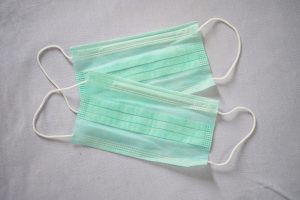 It is over a year since the start of the COVID-19 outbreak, and, listening to the daily news, it seems very likely that measures taken to control the spread of the virus will continue for some time to come, in spite of the vaccine rollout. Wearing a facemask is, and will continue to be, an ongoing requisite. But what protection do facemasks provide?

This article looks at the respiratory system and the value, or not, of wearing a facemask to counter the spread of infection, beginning with a contextual look at the function of breathing.

The function of breathing: Gaseous exchange and respiration

The atmospheric, ambient air we breathe in typically consists of around 78% nitrogen and 21% oxygen, with the remaining 1% consisting of a combination of carbon dioxide, helium, methane, argon and hydrogen.

Breathing is the regular inflation and deflation of the lungs, which maintains a steady concentration of atmospheric gases in the alveoli; that is, the constant intake of oxygen and excretion of carbon dioxide. 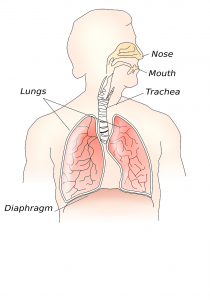 Air drawn into the lungs fills the alveoli, where it is momentarily held in suspension just long enough to facilitate gaseous exchange, before being exhaled from the lungs.

The walls of the alveoli and its capillaries are only one cell thick, they are semipermeable, thus enabling the process of diffusion; diffusion is the movement of a substance (in this case, carbon dioxide and oxygen) from an area of high concentration to an area of low concentration.

So, for example, oxygen, which is present in higher concentration in air absorbed by the alveoli, diffuses down the concentration gradient through the walls of the capillaries within the alveoli to the blood; the blood, in turn, carries oxygen in solution in blood water, and in chemical combination with haemoglobin (a blood protein) as oxyhaemoglobin (found in red blood cells), to tissues throughout the body – organs, muscle, skin and so on.

Conversely, and at the same time, carbon dioxide, which is in higher concentration in the blood, passes in the opposite direction, from the blood capillaries to the alveoli from where it diffuses into the lungs, then is exhaled with the outward breath into the external atmosphere; some water is also excreted from the body within the breath during exhalation (observed on cold days as a cloud-like vapour). 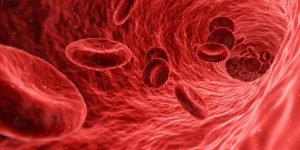 Carbon dioxide is transported within blood to the lungs by three different mechanisms:

Oxyhaemoglobin is an unstable compound and breaks up (dissociates) easily to liberate vital oxygen.

Factors that increase dissociation include raised carbon dioxide content of tissue fluid, raised temperature and a substance, known as 2,3-BPG, present in red blood cells. For example, in active tissues there is an increased production of carbon dioxide and heat, which leads to an increased availability of oxygen. In this way oxygen is available to the tissues in greatest need.

Respiration creates the energy-producing chemistry (e.g. glucose) that drives the metabolism of the body and most living things. Oxygen is vital to life. The body’s ability to absorb nutrients and eliminate waste, including carbon dioxide, from cells, from the lungs, and from the process of digestion, is also vital to health, and ultimately vital to life.

According to the Cabinet Office and the Department of Health and Social Care, ‘in the context of the coronavirus (COVID-19) outbreak, a face covering is something which safely covers nose and mouth; these may be cloth coverings or disposable coverings’, the aim of this advice is, apparently, not to protect the wearer but, rather, to protect other people against the spread of infection, in particular the vulnerable and elderly. This decree assumes the wearer is infected whether they display symptoms or not. 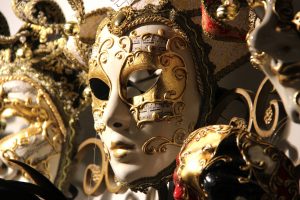 Masks have been worn throughout history; to protect the face during battle, as decorative
adornment during celebrations and rituals, to obscure identity, and to prevent inhalation of noxious fumes and pollution. During the middle ages, for example, plague doctors wore beak-shaped masks – the beak was stuffed with herbs and/or flowers to dispel bad smells (miasma); bad odours were thought to be the vector of disease.

Louis Pasteur (1822-1895) proposed the notion of bacteria (viruses, which are nano particles even smaller than bacteria, were yet to be discovered) as an airborne contagion in 1861. His theory, that germs are the vectors of disease, however, was contested at the time by Antoine Bechamp (1816-1908). Bechamp believed that symptoms of disease are expressions of ‘outfections’ (Young 2021), rather than ‘infection’ – instead of bringing disease to the body, bacteria are present at the site of disease to ‘clean up’ the terrain; sweating, fever, headaches, muscles aches and pains, diarrhoea etc. are symptoms of outfection, of the body ridding itself of toxic waste products.

Bechamp’s terrain theory was rebuked, even ridiculed, he was labeled a ‘crank’ (Pontin 2018), his proposition dismissed.  Pasteur’s germ theory, on the other hand, prevailed, gaining private and public support.  The notion that germs, invasive microscopic vectors of disease, are everywhere prompted greater attention to cleanliness and hygiene  (hand washing, sterilisation of environments, wearing protective garments during medical procedures and so on).  Doctors prescribed wearing facemasks during outbreaks of infection, epidemics and pandemics to limit the spread of infection. Lace veils were worn by women during this era as a fashion accessory, but more significantly, to protect their lungs from harmful airborne particles.

Science, however, has moved on considerably since the nineteen hundreds.  Today, electron microscopes enable insight into realms previously never imagined.   So, what does modern science reveal about the efficacy of wearing facemasks to prevent the spread of viruses and germs?

Discussing respiration, Baruch Vainshelboim (2021) reminds us in his article Facemasks in the COVID-19 era: A health hypothesis:

It is well established that acute significant deficit in [oxygen] O2 (hypoxemia) and increased levels of [carbon dioxide] CO2 (hypercapnia), even for few minutes, can be severely harmful and lethal; while chronic hypoxemia and hypercapnia cause health deterioration, exacerbation of existing conditions, morbidity and ultimately mortality.

Emergency medicine demonstrates that 5–6 minutes of severe hypoxemia during cardiac arrest will cause brain death with extremely poor survival rates. On the other hand, chronic mild or moderate hypoxemia and hypercapnia, such as from wearing facemasks, results in shifts to higher contribution of anaerobic energy metabolism, decrease in pH levels and increase in cells and blood acidity, toxicity, oxidative stress, chronic inflammation, immunosuppression and health deterioration.

The data suggest that both medical and non-medical facemasks are ineffective to block human-to-human transmission of viral and infectious disease such SARS-CoV-2 and COVID-19 – [this] supports against the usage of facemasks. Wearing facemasks has been demonstrated to have substantial adverse physiological and psychological effects. These [effects] include hypoxia, hypercapnia, shortness of breath, increased acidity and toxicity, activation of fear and stress responses, rise in stress hormones, immunosuppression, fatigue, headaches, decline in cognitive performance, predisposition for viral and infectious illnesses, chronic stress, anxiety and depression. Long-term, wearing a facemask can cause health deterioration, developing and progression of chronic diseases, and premature death.

Our first intake of breath at birth is absolutely vital for ‘life’, followed closely by our need for fluid, then nutrients – ‘is he/she breathing?’ is the immediate concern for the new born infant entering the world; every single breath issued from that first moment sustains life, breath by breath, throughout life.  The gaseous content and balance of the air we breathe is available to us at the perfect ‘pitch’ to sustain existence.  Health of the organism is determined by the properties and qualities, primarily of the atmosphere, fluids and nutrients we consume (nutrients also includes thoughts, emotions, intentions etc.).

Facemasks that cover nose and mouth interfere with the gaseous content and balance of air inhaled and exhaled and impede efficient respiration.  For example, wearing a facemask reduces intake of vital oxygen by 15% and excretion of CO2 by the same amount, creating an acidic internal environment. (Young 2021)  Facemasks also increase the temperature and moisture retention between the facemask and skin, within nose and mouth cavities, and the lungs.  They impede exhalation of toxins and waste products (including and other than CO2) excreted from fluids and tissues within the body, yet facemasks do not impede inhalation or exhalation of infinitesimally small viral  nano-particles.   Bacteria and germ components cling to the inner and outer surface of the (warm, moist) mask.  Thus, the perfect environment for bacteria and fungi to grow and proliferate is created; increasing propensity for infections of skin beneath the mask,  mouth, nasal cavities and lungs.  (Vainshelboim 2021)

MacIntyre et al (2015) conducted a randomised trial, which evaluated the efficacy of wearing cloth masks compared to wearing medical mask in hospital healthcare workers, and  found that ‘penetration of cloth masks by [micro and nano] particles was almost 97% and medical masks 44%’. Rates of infection (clinical respiratory infection, influenza-like illness and laboratory-confirmed respiratory virus) were higher in the cloth mask arm of the study. Neither cloth nor medical masks prevented penetration. The authors warned that moisture retention, reuse of cloth masks and poor filtration may result in increased risk of infection, and cautioned against the use of cloth facemasks.

Bae et al (2020) conducted a study to ascertain the ‘effectiveness of surgical and cotton masks in blocking SARS-CoV-2’ (COVID-19), concluding that neither surgical nor cotton masks effectively filtered SARS-CoV-2 during coughs by infected patients; microscopic CV particles passed through both types of mask. They also acknowledged “we do not know whether masks shorten the travel distance of droplets during coughing, [suggesting] further study is needed to recommend whether face masks decrease transmission of virus from asymptomatic individuals or those with suspected COVID-19 who are not coughing.”

Sharma et al (2020) carried out a systematic review and meta-analysis to determine the efficacy of wearing cloth facemasks to prevent coronavirus infection transmission. They conclude that ‘cloth masks have limited efficacy in combating viral infection transmission’; ‘efficacy of cloth facemasks filtration varies and depends on the type of material used, number of layers, and degree of moisture in mask and fitting of mask on face’. In spite of acknowledging that cloth facemasks offer inadequate prevention, they suggest that ‘cloth masks may be used in closed, crowded indoor, and outdoor public spaces involving physical proximity to prevent spread of SARS-CoV-2 infection’.

Facemasks compromise the immune system by inhibiting appropriate respiration.  They do not prevent transmission of viral (or other nano or micro) particles, and are likely to create unfavourable conditions for the person wearing the mask (leading to infection of the respiratory system and poor systemic function), especially when they are worn for long periods of time.

Facemasks are often used in industry, or when undertaking DIY activities, and may reduce inhalation of large particles, such as from dust (saw dust, dirt, fibres etc.), and moisture created by sprays (water, chemicals, paints etc.).  The same health concerns apply as above, however, so frequent replacement with a new or clean facemask, ‘fresh air’ breaks, and limited duration of use, makes sense.

Facemasks do not prevent viral expression or infiltration.  In the context of viral outbreaks, it makes more sense to bolster and support the immune system, rather than compromise resilience by inhibiting efficient respiration, thus toxifying the body’s internal terrain and unnecessarily burdening, and so weakening, immune function.

Face coverings: when to wear one, exemptions, and how to make your own.

Pontin, J. (2018) The 19th-Century crank who tried to tell us about the microbiome: Wired. https://www.wired.com/story/the-19th-century-crank-who-tried-to-tell-us-about-the-microbiome/

Young, R. O. (2016) Who had their finger on the magic of life- Antoine Bechamp or Louis Pasteur? MedCrave online https://medcraveonline.com/IJVV/who-had-their-finger-on-the-magic-of-life—antoine-bechamp-or-louis-pasteur.html